Dr. Muriel Lambert received her Ph.D. degree from Northwestern University. Dr. Lambert continued her training as a post-doctoral fellow at Harvard University, followed by a post- doctoral fellowship in the Department of Dermatology at Yale University School of Medicine. Dr. Lambert has been an NIH funded investigator whose research focus has been on the role of DNA repair in genomic stability in genetic diseases defective in DNA repair. She is particularly interested in the underlying mechanism for the hematological disorder, Fanconi anemia (FA), characterized by defective DNA repair, genomic instability and a marked predisposition to develop cancer. Her laboratory has demonstrated that the structural protein, non-erythroid alpha-spectrin (aIISp), is present in cell nuclei where it plays a role in DNA repair, telomere maintenance and chromosomal stability. Her lab has shown that there is a deficiency in aIISp in FA cells due to its decreased stability and this leads to a number of the phenotypic defects observed in these cells. Current
research is focusing on methods to reverse the instability or breakdown of aIISp in FA cells so as to enhance genomic stability and reverse the defects in the cellular phenotype observed. Dr. Lambert is course director of a widely subscribed course, Cellular Pathology, as well as the course, DNA Repair in Health and Disease. 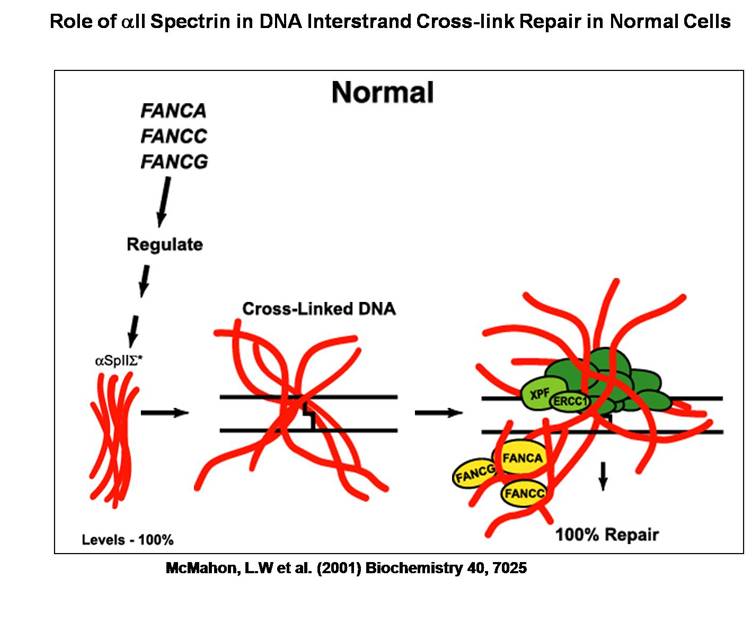 The research in my laboratory focuses on the role of DNA repair in genomic stability in
genetic diseases with known DNA repair defects. We are currently investigating the
underlying mechanism for the hematological disorder, Fanconi anemia (FA). FA a genetic
disorder characterized by bone marrow failure, aplastic anemia, diverse congenital
abnormalities, genomic instability and a marked predisposition to develop cancer. Cells
from patients with FA have a defect in ability to repair DNA interstrand crosslinks
(ICLs). We have demonstrated that the structural protein nonerythroid alpha-spectrin
(aIISp) is present in mammalian cell nuclei where it plays a role in repair of DNA ICLs
and is important for telomere maintenance and chromosomal stability. We have shown that
there is a deficiency in aIISp in FA cells which is due to reduced stability of this
protein. We propose that the deficiency in aIISp in FA cells is one of the factors in the
DNA repair defect and the telomere dysfunction and genomic instability observed in this
disorder after ICL damage. We have demonstrated that aIISp binds directly to one of the FA
proteins, FANCG, and have proposed that binding of FA proteins to alpha IISp is important
for maintaining its stability. We have proposed a model for the role of aIISp in DNA
repair. In this model, aIISp binds to DNA at sites of damage and acts as a scaffold to aid
in the recruitment of repair and FA proteins to these sites, thus enhancing the efficiency
of the repair process. In FA cells, decreased levels of aIISp lead to reduced binding
of aIISp to damaged DNA and decreased recruitment of repair proteins to sites of damage,
thus leading to decreased levels of DNA repair in these cells. We have shown that
restoring levels of aIISp in FA cells, by reducing its breakdown, corrects the DNA repair
defect, telomere dysfunction and chromosome instability. Since aIISp is involved in a
number of different cellular processes, such as signal transduction, gene expression, and
cell growth and differentiation, a deficiency in this protein could have far reaching
consequences and could possibly account for some of the diverse cellular and
clinical defects that have been observed in FA. Ongoing research is involved in studying
the role that the FA proteins play in the stability of aIISp in the cell, the role aIISp
plays in telomere maintenance and genomic stability, and methods to reverse the
instability or breakdown of aIISp in FA cells so as to enhance genomic stability and
reverse the defects in the cellular phenotype observed in these cells.


© 2020, Rutgers, The State University of New Jersey. All rights reserved.